Valmiki on hearing the story of Rama narrated by Sage Narada, worshipped him along with his disciples. After Narada left the hermitage Valmiki with his disciples went around the banks of River Tamasa where he saw couple of crane birds, in the vicinity of that river's foreshore, flying there about in togetherness and chuckling delightfully. Even while Valmiki was looking at them, a tribal hunter killed the male bird with his arrow. Valmiki noticed the male bird slain on ground reeling with blood covered wings. The female bird on seeing the fate of his companion cuckooed with sorrow. On seeing the bird felled that way and the female bird out of state of compassion crying with sorrow the sage Valmiki cursed the tribal hunter. The sentences uttered by sage Valmiki surprisingly became a four-line stanza with each line equally postulated that had many meanings in it.

That was in fact the beginning of authoring Valmiki Ramayana. Valmiki determined to write Ramayana elaborating what sage Narada tutored him in brief. Later Valmiki completed his bathing in the River Tamasa and carrying his sacramental belongings like the water vessel etc. moved towards his hermitage along with his disciples. On the way to hermitage he mentioned about his stanza several times repeatedly to his disciples. All through the way he became thoughtful as to why his utterance in grief and anguish for the bird became a powerful stanza and the curse has become a blessing one? Valmiki, after returning to the hermitage along with disciples, was totally preoccupied on the stanza that he uttered.

Lord Brahma comes to see Valmiki
While Valmiki was thinking of his utterances and the way it became a purposeful Shloka, the Four-faced creator of universe, the almighty Lord Brahma, arrived there on his own, to see that distinguished saint Valmiki. Not knowing that Brahma arrived to his hermitage to execute a divine deed through him, Valmiki started searching for valid reasons. Brahma started keenly observing Valmiki.

Brahma entrusts responsibility of
telling Ramayana to Valmiki
Then Brahma told Valmiki the reason for his utterances in the form of a stanza. He said “Oh! Saint! What has come out of your mouth is really a Shloka-four lined stanza. Goddess Saraswathi made it come out from your mouth. There is no need to think through. That Shloka of yours came out from you at my instance and hence you shall render the legend of Rama, in its entireness. You shall narrate the legend of Rama. The entire story of Rama will be in front of your eyes in its totality to enable you to write it in detail. As long as Rama's legend authored by you flourishes, till then you will flourish in heavenly abode. Your Ramayana shall remain as a great legend for ever and ever”. On saying like this, the Brahma vanished from there. Valmiki decided to write Ramayana.

Valmiki through Yogic Insight
views the whole Rama story
Valmiki gets ready to see the Rama Story as it is and as it happened. The sage saw wholly and clearly by the yogic power conferred by Brahma on him. Valmiki through his absolute concentration was able to see Rama, Lakshmana and Seetha, also King Dasharatha, and his wives Kousalya, Sumitra and Kaikeyi as well as the whole of Ayodhya people and what happened to Rama when he was in kingdom Ayodhya. Valmiki wanted to see the whole of Rama Story and then pioneered to author all of the legend of Rama in its entirety. 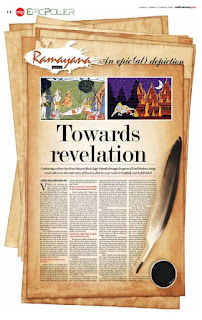 Valmiki saw Rama’s birth, killing the monsters Subhahu and Tataka in his childhood, the citizen friendly attitude of Rama and his patience, people bestowing confidence on Rama, the truthfulness of Rama, his very great valor, his gracefulness to all, his universal cordiality, perseverance, courteousness, and his truthful conduct, stories narrated by Sage Vishvamitra, Rama's breaking the great bow of Shiva, marriage with Sita, dispute of Rama and Parashurama etc.

Valmiki also saw, the merits of Rama, preparations for Rama’s coronation, Queen Kaikeyi’s malicious intentions, disruption of coronation plan, Rama’s exile to forests, Dasharatha’s death, grief of Ayodhya people, Rama leaving them all and going to forests, meeting Guha, asking Sumantra to return to Ayodhya, crossing River Ganga, visiting hermitage of Sage Bharadwaj, seeing Chitrakoota, construction of a hermitage and dwelling there, Bharata's arrival at that place  to request Rama to come back, Rama's denial of it, Rama's offering water obsequies  to his father, crowning shoe-sandals of Rama by Bharata, Bharata's living in a village Nandigrama etc.

Valmiki further saw Rama's going to Dandaka forests, Killing Monster Viradha, Rama's visit to Sage Sarabhanga and Suteekshna, their visiting Anasuya, her giving a body cream to Seetha, visit to sage Agastya, conversation with Jatayuvu, living in Panchavati, defacing Shoorphanaka, killing of demons like Khara, Dhooshana and Trishirsa and the upsurge of Ravana thereby, killing of demon Mareecha who was in the form of a fake deer, Ravana's abduction of Sita, Raghava's anguish at the loss of Sita, Ravana's killing the mighty eagle Jatayuvu, Rama's seeing Kabandha, Shabari’s hosting, meeting and conversation of Rama and Hanuman etc.

Then Valmiki with his yogic insight saw Rama reaching Rushyamook along with Hanuman, friendship with monkey leaders Sugriva, killing Vali with one single arrow in the duel between Vali and Sugriva, Vali’s wife Tara’s grief for the deceased Vali, coronation of Sugriva to the Monkey Kingdom etc.

Continuing to know the further story of Rama, Valmiki with his yogic insight saw Rama’s annoyance on Sugriva for not taking up the work of searching Sita immediately after completion of monsoon, Sugriva immediately assigning the job to monkey leaders and instructing them to go to all the four corners, Sugriva briefing them about the places that they are likely to see in their pursuit etc.

Later Valmiki saw Rama giving his ring to Hanuman going towards southern part as his representation, Hanuman and his entourage monkey team entering the cave of Swayamprabha, Sampathi the brother of Jatayuvu informing monkeys that Sita is in captive in Lanka, Monkeys climbing Mahendragiri hill, Hanuman crossing the ocean, Mainaka requesting Hanuman to rest on his back for a while on way to Lanka, Surasa challenging Hanuman’s heroism, Hanuman killing Simhika, Hanuman crossing the ocean and entering Lanka, thinking of proper strategy to search Sita, Hanuman noticing the great Pushpak plane etc.

Valmiki further saw Hanuman briefing his colleague monkeys about his trip to Lanka, monkeys consuming honey in the honey garden, Hanuman solacing Rama, presenting the jewel given by Sita, Nala's building the bridge on ocean, reaching Lanka, Rama with his army crossing over the ocean by the boulder bridge built by Nala, seizure of Lanka in night, Vibhishana the younger brother of Ravana coming to meet Rama, Rama killing Ravana, Kumbhakarna and Indrajit in the war, Sita’s entering the sacred fire and returning safely, Rama accepting her, coronation of Vibhishana, Sita-Rama-Lakshmana and others return journey to Ayodhya on the divine Pushpak Aircraft, Rama meeting Bharata in Nandigram, Sriram’s coronation, all those who accompanied Rama returning to their places etc.
Posted by Jwala's Musings at 7:34 PM