For any Civil Society Intelligentsia Team or to that matter for their vociferous supporters across the nation it should be of utmost priority to see that Citizen Charters in all government departments and public sector undertakings are in place as an effective redress mechanism. In fact the importance of these was discussed more than two decades ago itself in the Chief Ministers’ Conference presided over by the then Prime Minister IK Gujral held on May 24, 1997 on the threshold of 50 years’ of Independence. A scheme for drafting them on a priority was also prominently included in the Nine Point Action Plan of CMs Conference. It was made mandatory for all government departments-Center and State-formulating Citizens’ Charters and initiating Effective and Speedy Public Grievance Redress System.

In fact when a feedback was taken 15 years later in January 2011, 24 state Governments and Union Territories were in the process of formulation of charters by then. VK Agnihotri, former Indian Administrative Service Officer of AP cadre and in later days Rajya Sabha Secretary General was responsible for monitoring the implementation of Charters as well as redress mechanism at that time as Secretary to Government of India in the department of Administrative Reforms.

Soon after the CMs meet of 1997, formulation of Citizens' Charters commenced in the departments and offices, to begin with those which had a large public interface. The methodology was based on a consultation process, involving different stakeholders, specifying standards of service and time limits that the public can reasonably expect. This considerably helped in improving the quality of administration and providing a responsive interface between the citizen and the public services from the Government. The process also placed the citizen at the center of administration instead of making him a passive recipient of services rendered indifferently with no concern for quality, timeliness or cost.

The citizen’s charter is a document prepared by the service provider in a clear and precise manner about the quality and method of delivery of services to the users (Citizens) of the service. The purpose of the citizen’s charter is to: Improve the quality of service to the public, give people more choice, tell people what kind of service to expect from the government departments and make sure people know what to do if something goes wrong in the process of service delivery. The six Principles of citizen’s charters are: Published Standards, Openness and Information, Choice and Consultation, Courtesy and Helpfulness, Redress when things go wrong and Value for Money. Provision for independent scrutiny of actual implementation with the involvement of citizen groups is the basic character of Charters. Though the charter is not proposed to be made justifiable it would carry a moral commitment of the government and would provide a framework under which public services could be evaluated.

Implementation of Charters by the respective organizations is a major task, covering vast distances and manpower. It, therefore, needs a monumental and sustained effort at training, orientation, publicity and awareness building, as well as regular and honest evaluation, to transform the Charter from a significant piece of paper into an instrument for changing long-entrenched values and mind-set. Creating a platform of interests between the service provider and its users is the first step, balancing the strengths and constraints of the former against the reasonable expectations of the later are the next.

In the then united Andhra Pradesh, for a while, remarkable work was done in this regard. Formulation of Charters and Grievance Redress Mechanism was a priority item. Dr MCR HRD Institute, the premier training center for capacity and capability building of state government employees was the platform and coordinator to formulate charters to begin with. Dr MCR HRD Institute was entrusted with the work of conducting departmental workshops in the Institute for select departments to familiarize with the Principals and modalities in preparing the Citizens Charter. That was purely the personal initiative of the then Director General PVRK Prasad, a senior IAS officer to put the plan in to Action. 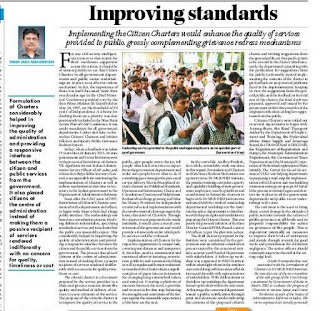 The draft charters prepared in the Institute were considered by the Government and an informal consultation process started by the concerned minister, secretary and Head of Department with the stake holders. A follow up workshop was organized in HRD Institute within a fortnight where in the minister concerned along with his senior officials interacted formally with representatives of stake holders. Keeping in view the deliberations in the follow up workshop, the department firmed up the draft within the next one week. At this stage the concerned department issued a public notification through print and electronic media indicating the contents of the proposed citizen’s charter and inviting suggestions from the general public on the specific points to be covered in the charter. Simultaneously the department (coinciding with the publication for suggestions from public) informally started implementing the contents of the charter to get a feedback on any practical problems faced in the implementation. Keeping in view the suggestions from General Public and the feedback in the trial run of the charter final draft was prepared, approved and issued by the Government, within three months of the original notification calling for suggestions from public.

Citizens Charters were rolled out in several departments to begin with. Among them the Road Transport Authority, the Department of Employment and Training, the Hyderabad Metro Water Supply and Sewerage Board, the TRANSO and 4 DISCOMS, the Department of Registration and Stamps, the Municipal Administration Department, the Commercial Taxes Department and the Municipal Corporation of Hyderabad implemented them in total initially. The Center for Good Governance (CGG) was helping departments in preparing a road map for implementation of the Charters and was building awareness among user groups. It’s better if the process is begun again and charters are in place in all the government departments and public sector undertakings in the state.

The real issue is the need to bring about a total change in the attitude of public servants towards redress of public grievance at all levels and to pinpoint responsibility for action on grievance of the people. This is dependent internally on measures to improve their levels of motivation and morale through rewards for good work and punishment for deliberate negligence. The senior officers should constantly supervise the staff at the cutting-edge level.

(Jwala Narasimha Rao was associated with formulation of Charters in Dr MCR HRD Institute. He was also one of the two members of the sub-group of the Core-Group constituted by Government of India in March 2002 to evaluate the progress of Charters in various States and Union Territories as part of the Status of Administrative Reforms in India).
Posted by Jwala's Musings at 9:21 PM