What makes election of President important

With the lone exception when VV Giri contested as an independent candidate for the post of President, at the behest of the then Prime Minister Indira Gandhi, and defeated the official Congress candidate Neelam Sanjiva Reddy, the election to this highest office in India has never been so exciting as it is this time around.

A majority of Congress members had then voted for Reddy, the defeated candidate. Giri edged through with a minority of Congress votes and backing from a curious combination of opposition groups which included the Left. The appeal of Sanjiva Reddy’s supporters to the right-wing parties to cast their second preference votes to Reddy did not matter much.

Why Indira Gandhi was so determined at that time to have her nominee as President was clear. She knew that the so-called syndicate (a group in Congress opposed to Mrs Gandhi) had plans to unseat her through their choice of President because the Constitution of India vests enormous powers in the President if there is a strong person in the seat.

Similarly, with popular sentiment beginning to turn against the BJP and Prime Minister Narendra Modi, the choice of President, who plays a key role in government formation, has become all-important. A section of BJP stalwarts who are opposed to Modi may like their choice of Presidential nominee as it happened during Indira Gandhi’s time.

According to Indian Constitution the one and only really elected office is that of President of India and rest of all are nominated or rather appointed the way it is specified in the provisions. The President is elected by all the elected peoples’ representatives of Lok Sabha and State Legislatures as well as the Rajya Sabha. Thus, certainly, the President is more representative in character. The office of Vice-President is also elected one.

The President of India is the head of state of the Republic of India. He is the formal head of the executive, legislature and judiciary and is also the commander-in-chief of the Indian Armed Forces. Article 53 of the Constitution of India states that the President can exercise his or her powers either directly or by a subordinate authority to him in accordance with the provisions of the Constitution. Thus, the President possesses enormous powers.

The powers and functions that have been vested in the President of India may be classified under the Executive powers, Legislative powers, Military powers, Diplomatic powers, judicial powers, financial powers and Emergency powers. 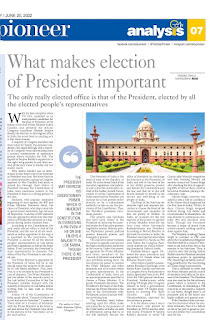 President shall, before entering upon his office, make and subscribe in the presence of the Chief Justice of India, an oath or affirmation saying that he or she will faithfully execute the office of President (or discharge the function of the President) of India and will to the best of his or her ability preserve, protect and defend the Constitution and the law and that he or she will devote himself or herself to the service and well-being of the people of India.

The Head of the State has absolute right and absolute discretion to choose the Head of the Government and examples of this are plenty in Britain. In India an occasion for real exercise of the power to appoint Prime Minister arose for the first time when Sarvepalli Radhakrishnan was President. According to Michel Brecher, in his book Succession in India, the President exercised his discretion and appointed GL Nanda as PM even before the Congress Party could indicate its choice following Jawaharlal Nehru’s death. Radhakrishnan again followed the same procedure and appointed GL Nanda when Lal Bahadur Shastri died.

After Indira Gandhi assassination President Zail Singh, even before Rajiv Gandhi was elected as Congress Party Parliamentary leader, appointed him as PM. Consequent to 1989 general elections President Venkatraman, while inviting VP Singh after Congress refused to form government and then after VP Singh’s resignation in inviting first Rajiv Gandhi and then Chandrashekhar, exercised his discretionary powers.

If in the above case it was a discretionary role played by President, in 1979 it was a prominent role. Inviting YB Chavan after Morarji’s resignation by President N Sanjiva Reddy and later denying Morarji to give yet another chance but finally preferring Charan Singh over Morarji after checking the lists of supporting MPs of both of them could be termed as President playing a prominent as well as discretionary role. Charan Singh however, was asked to seek vote of confidence of the House which happened for the first time in India. Within 25 days Charan Singh resigned without facing Lok Sabha and recommended for its dissolution. He was allowed to continue as caretaker PM and elections were held. Though the President became a target of attack from several corners nothing could be done against him. All because President was powerful than the comments!

President, in asking Charan Singh to continue as PM, arisen out of the Constitutional obligation that, there shall be council of ministers to aid and advise him in the exercise of his functions. Thus, it could be clearly seen that during Sanjiva Reddy’s time the President proved to be more powerful. He had his choice of appointing PM, dissolving Lok Sabha and setting guidelines for the functioning of Charan Singh government.

This is an ample proof that the Prime Minister and his council of ministers hold office at the pleasure of President. The President may also exercise his discretionary power, which is inherent in the Constitution, in dismissing a PM even if he or she enjoys majority in Lok Sabha, though there is no precedent and in future also highly unlikely as it appears now.

If the President does not exercise his discretion when situation demands, then, it is a failure on his or her part to preserve, protect and defend the Constitution and the law.