The Ministry of Jal Shakti of the Government of India, through Gazette Notification dated 15th July 2021 has notified the jurisdiction of Godavari River Management Board and Krishna River Management Board, which provide the required authority and power to the two Boards in terms of administration, regulation, operation and maintenance of listed projects in Godavari and Krishna rivers in the two States. According to the authorities, this step is expected to ensure judicious utilization of water resources in the two states, which in fact is not true.

The Centre while notifying the jurisdiction of Krishna and Godavari River Management Boards transferred to them the operation of all projects, including generation of hydel power, in the two river basins in A.P. and Telangana effective from October 14.

The imperatives of the notification are: 36 projects in Krishna basin and 71 projects in Godavari basin are proposed to be kept under the control of KRMB and GRMB respectively. This means both the river basins will be under the direct control of Central Government. Both states have to stop the works of unapproved ongoing projects immediately and obtain approvals within 6 months of this notification. If approvals are not obtained within the stipulated time of 6 months such completed unapproved projects shall cease to operate.

Within 60 days both Governments shall deposit Rs 200 Crores to each totaling Rs 400 Crores. Matters relating to power generation, transmission and distribution shall be implemented by the states as per the directions of the boards. Both the state Governments shall be responsible for the management of natural calamities like drought or floods as per the advice of the boards.

In this context, it is of utmost importance to recall the Telangana stand on the notification of jurisdiction of KRMB. Telangana Chief Minister K. Chandrasekhar Rao expressed the stand of his government in the Second Apex Council held on 6th October, 2020 that “unless water sharing is finalized by the Tribunal under Section 3 of Inter State River Water Disputes Act (ISRWD Act) 1956, the question of notification of Jurisdiction of Boards should not arise.”

He further stated that the “Tribunal matter is pending in Supreme Court and matter is Sub-Judice, hence on this account also matter cannot be deliberated”. Similar opinion was expressed in the first Apex Council Meeting held on 21st September, 2016 also. The opinions of Chief Minister were well recorded in the Minutes of Apex Council Meetings. In spite of difference of opinions of the Member States on the issue of Jurisdiction, Ministry of Jalshakthi issued the Gazette Notification on 15th July 2021 unilaterally without communicating the Draft Notification to the Member States for their remarks and comments which is undemocratic and against the spirit of co-operative federalism. It literally means usurping the rights of states by Center. 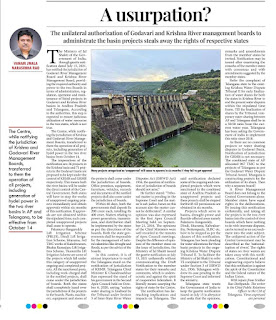 The notification has far reaching implications and impacts on Telangana. The Said notification declared some of the ongoing and completed projects which were sanctioned in Combined State of Andhra Pradesh as unapproved projects and shall be stopped forthwith till permissions are obtained in 6 months.

Projects which serve in basin, drought prone and Fluoride affected areas namely, Palamuru-Rangareddy, Dindi, Sita Rama, Kaluwakurty, Nettempadu, SLBC etc. have to be stopped as per clauses of this notification. Telangana State has been pleading for water allocations to these in Basin projects in the ongoing Krishna Water Dispute Tribunal II. To facilitate Ministry of Jalshakthi to refer TS complaint to the Tribunal under Section 3 of ISRWD Act, 1956, Telangana State withdrew its case pending in Supreme Court and informed to the Ministry.

Refer the complaint of Telangana State to the existing Krishna Water Dispute Tribunal II under Section 3 of ISRWD Act, 1956 for early finalization of water shares for both the states in Krishna River to end the present water disputes between the states within stipulated time frame.  Till the finalization of Shares by the Tribunal, temporary water sharing between the AP and TS shall be in 50:50 ratio from the current water year. Telangana State has been asking Government of India to implement this ration since 2018.

As there are no common projects or water sharing disputes in Godavari Basin, Notification of Jurisdiction for GRMB is not necessary. Combined state of AP allocated 967 TMC to the Projects of Telangana as per the Godavari Water Dispute Tribunal Award. Telangana State is constructing projects for utilization of its share. Then why a separate Board?

A River Management Board means not the Central Govt alone. Member States have equal rights on the deliberations of the Board. By issuing this Notification unilaterally and taking all the Projects in the two River Basins into the Control of River Boards, which have nothing to do with Interstate disputes, is termed as encroachment into the state subject. The unilateral action of the Central Govt may be described as Nationalization of Rivers. The rights of states on river waters are taken away with this notification. Constitutional and Engineering Experts are of the opinion that this Notification is against the spirit of Constitution of India and federal nature of Indian Union.

(With Inputs from Sridhar Rao Deshpande)