After Independence, successive Governments at the Center, either headed by the Congress, the Bharatiya Janata Party or others briefly, set up more than 45 committees and commissions in pursuit of administrative reforms. Unfortunately, most of their recommendations, which by and large remained on paper, are not readily available today for any required reference.

There has been weak follow up action by the Union Governments, while an absence of policy watchdogs in the civil society allowed administrations to be causal with the reports of the administrative reform commissions. On the occasion of the 75 years of Independence being commemorated as 'AzadiKa Amrit Mahotsav', it may be appropriate to review the futile exercise done in this direction and consolidate fruitful recommendations for a better transparency and accountability in governance.

A noteworthy and concerted effort was made in this direction in the conference of Chief Ministers held on May 24, 1997, leading to a comprehensive discussion to draft a nine-point Action Plan for Effective and Responsive Government at the Central and State levels. The then prime minister IK Gujral, who was in office just for a year, presided over the deliberations. The conference recognized that, as the country completes 50 years of independence, and as the people are assailed by growing doubts about the accountability, effectiveness and moral standards of administration, it was agreed that immediate corrective steps must be taken to restore the faith of the people in the fairness, integrity and responsiveness of the administration to rebuild the credibility of the government.

It was agreed in the conference that each state would work for the implementation of the Action Plan, making appropriate allowance for variation on local circumstances. The Chief Ministers' Conference resolved that the Central and State Governments would work together to concretize the action plan dealing with the themes of accountability, transparency and citizen friendly Government.

The nine points of the Action Plan were: Citizens' charter and an accountable administration; Effective and speedy public grievance redress system; Empowering elected local bodies in rural and urban areas and decentralized delivery of services; Review of laws, regulations and procedures; Transparency and Right to Information; Access of the public to information from public offices and creation of facilitation counters; Code of ethics for public services; Tackling corruption and cleansing the administration and Stability of tenure and a scheme for civil services board.

The Conference also decided to set up a Committee under the Cabinet Secretary, including some of the Chief Secretaries in the country as well as some senior officials of the Government of India. The committee was required to draw up a time bound agenda for legal and regulatory reforms in priority areas and consider steps to secure widespread acceptance and feedback from different sections of the public and elicit cooperation of people for responsive administration.

The Core Group subsequently decided to constitute a Sub Group (with the author of this article as one of the members) to compile, analyze and evaluate responses from state governments. The Sub-Group after a preliminary study observed that the Central Government, State Governments and Union Territory Administration initiated action in pursuance of recommendation of the Chief Minister's Conference. 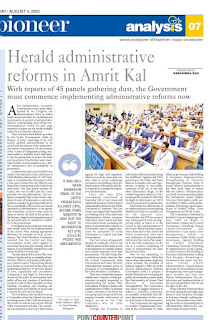 There was considerable progress initially and a majority of State governments promptly responded in implementing the Action Plan. Formulation of Citizen Charters and establishment of Public Facilitation Centers. However, it was felt by the core group and sub-group that the progress towards achievement of targets set-up in the CMs Conference was far from satisfactory.

Though the Freedom of Information Bill was passed during the AtalBihari Vajpayee-led NDA government, the Center and States failed to formulate rules and regulations, resulting in non-implementation of the Act. It was only when Manmohan Singh, of the United Progressive Alliance (UPA), became prime minister in 2004 that the Right to Information Act (RTI) could be passed and implemented.

Afterwards, the effectiveness of its implementation started getting diluted and of late it is certainly not on the expected lines. Nevertheless, the RTI has come to stay. Subsequently, what was happening either in States or at the Center in the implementation of the Action Plan is anybody's guess. Every State and to that matter the Union Government have their own definition of administrative reform and the Action Plan adopted in the CMs conference on the eve of a country completing 50 years of independence has been almost kept aside.

Now we are celebrating 75 years of independence. While this was so, when Manmohan Singh was prime minister, the president of India on August 31, 2005, set up the Second Administrative Reforms Commission (ARC) to prepare a detailed blueprint for revamping the public administration system under the Chairmanship of former Chief Minister of Karnataka Veerappa Moily. The Commission was asked to suggest measures to achieve a proactive, responsive, accountable, sustainable and efficient administration for the country at all levels of the government.

Prime Minister Narendra Modi as of now during the past eight years seems to have not given a thought to this area, though, nothing prevents his government from studying the earlier recommendations on Administrative Reforms for concrete action if found worthy.